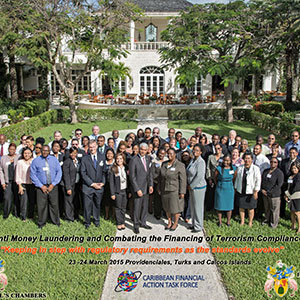 The Caribbean Financial Action Task Force (CFATF) in conjunction with the Attorney General’s Chambers and the Financial Intelligence Agency (FIA) of the Turks and Caicos Islands hosted the 10th Compliance Conference: ¨Keeping in step with regulatory requirements as the Standards evolve” from the 23rd - 24th March 2015 at the Regent Palms Resort in Providenciales Turks and Caicos Islands.

Around ninety participants from several financial institutions in the Caribbean region, attended the Compliance Conference, where they had the opportunity of participating in interesting discussions and sharing ideas with other high level professionals.  The CFATF pursues the objective of achieving effective compliance with and implementation of the FATF Standards to prevent and control money laundering and to combat the financing of terrorism. In that regard, the CFATF, the Attorney General´s Chambers and the FIA are preparing the national framework for the upcoming fourth Mutual Evaluation of the AML/CFT system of the Turks and Caicos Islands, which will measure the effectiveness of the TCIs efforts in countering money laundering and the financing of terrorism.

The Compliance Conference provided an opportunity for training to all the agencies and representatives of the public and private sector that would allow them to face the challenges of the 4th Mutual Evaluation.   Participants were provided with an in-depth and practical learning experience while encouraged to participate in honest dialogue with key parties from different segments of the complex world of anti-money laundering risk management.

The conference featured International and local experts in the Anti-Money Laundering and Counter Terrorism field who made presentations on the new Financial Action Task Force Standards; discussed Risk Assessments, Customer Due Diligence, Supervision, Challenges for the TCI and the most relevant trends and topics that all stakeholders in the AML/CFT industry need to be aware of. 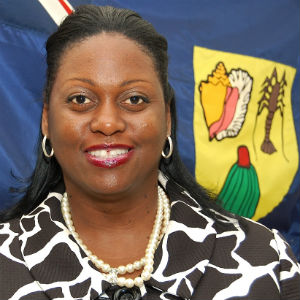 The Caribbean Financial Action Task Force (CFATF) would like to specially congratulate the Honorable Attorney General Rhondalee Braithwaite-Knowles on her appointment and wish her every success. The CFATF, today chaired by a woman, the Honorable Madam Allyson Maynard Gibson, continues to have prominent and committed women such as Rhondalee, who significantly contribute to shape the present and the future of the organization. See official press release below.
______

Rhondalee Braithwaite-Knowles has been appointed the new Attorney General of the Turks and Caicos Islands (TCI), His Excellency the Governor, Peter Beckingham, announced this Monday, 24 February 2014.

Beckingham informed the TCI Premier, the Hon Dr Rufus Ewing, and the Leader of the Opposition, the Hon Sharlene Cartwright Robinson, and this morning before making the following statement:

"Rhondalee Knowles' was the outstanding candidate in an open and keenly fought selection process, which included international candidates from the Caribbean and Europe.

"I have worked closely with Rhondalee since my arrival last October, and she has always impressed me with her professional judgement, energy, and willingness to make tough decisions.

"I look forward to continuing to work with her in what is one of the key positions in TCI life.

"That the TCI is now one of a few UK Overseas Territories to have an Attorney General from its own citizens, is an added bonus.

"This is a good day for Rhondalee, a great example to others, and something we should all celebrate."

Braithwaite-Knowles was Acting Attorney General of the TCI since October 2013.

The position was advertised in the TCI local press and internationally. Twenty six applications were received with five candidates selected for interview.

MER of Turks and Caicos Islands