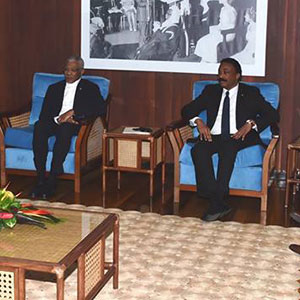 President David Granger, on Thursday , met with the Financial Action Task Force and International Cooperation Review Group (FATF/ICRG), who are currently in Guyana to conduct a site visit to assess the progress made by the country to bring it into compliance with the requirements of the FATF and the Caribbean Financial Action Task Force (CFATF). The team was accompanied by Attorney General and Minister of Legal Affairs, Mr. Basil Williams.

The Assessor from the ARRG, Mr. Gonzalez de Lara, said that the team is pleased with the Guyana Government’s efforts and the work being done by the various law enforcement agencies. He also said that the FATF/CFATF recognises that all of these changes have been achieved in a relatively brief period of time.

President David Granger reiterated his Government’s commitment to compliance and its importance to Guyana’s security. “We welcome your coming here and the work you are here to do and we look forward to favourable outcomes… We are committed to ensuring that there is full compliance in every respect,” President Granger said.

With regard to the political will to comply, the President explained to the visiting team that his Coalition Government is made up of six different political parties, each of which has a firm stance against financial impropriety. He also spoke of the menu of measures that his Administration has taken, in just a little over a year, in keeping with the recommendations of the FATF/CFATF, including the passage of required legislation.

He reminded that as a small country with porous borders, Guyana is vulnerable to transnational crimes such as human trafficking and contraband smuggling and as such, the country has been doing its best to tackle these problems within the limit of its resources.

In addition, Minister Williams noted that while there is still some resistance to the new measures, the Government has been doing a lot of work to ensure that the population gets a better understanding of the importance of fighting money laundering the financing of terrorism.