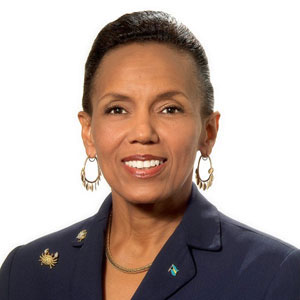 On accepting the baton of leadership of the Caribbean Financial Action Task Force (CFATF) for a second time in eleven years, The Honourable Allyson Maynard Gibson, Attorney General and Minister of Legal Affairs, Commonwealth of The Bahamas, launched an Eleven Point Action Plan, that will principally encourage the ongoing strengthening of the Anti-Money Laundering and Combating the Financing of Terrorism regimes (AML/CFT) across the Caribbean Basin Region, so that CFATF members through enhanced collaboration, communication and co-operation will successfully achieve the goal of at least seventy five (75) percent compliance with the Financial Action Task Force (FATF) Recommendations.

“These are very exciting times for the CFATF and indeed for the global AML/CFT network” Madame Chair Maynard Gibson who engaged in a wide ranging interview with CFATF News, at the close of the CFATF Thirty Eight Plenary Meeting, which was held in Freeport, The Bahamas, during November  17-21 2013.
“Our organization has been warmly commended by current FATF President Mr. Vladimir Nechaev” continued Maynard Gibson “who graciously attended our Thirty Eight Plenary Meeting.

Madame Chair Maynard Gibson confirmed that in delivering his Special Remarks at the Opening Ceremony of the CFATF Thirty Eight Plenary Meeting, President Nechaev, to the delight of the membership noted that “I am able to state without a doubt that CFATF should now be perceived as one of the best in its class”

“This is a critically important accolade for the Caribbean Basin Region and the CFATF will be forever grateful for the fearless leadership of the then CFATF Chair, Mrs Ersilia de Lannooy, who in assessing the parlous state of the organisation’s finances, and with the expertise of her position as Minister of Finance, Netherlands Antilles  as it then was, issued a call for urgent and immediate corrective action by the membership and set in motion an ambitious and intrusive three programme of introspection, reflection and reform that irrevocably changed the psychology, organizational structures and achievements of the CFATF” Maynard Gibson continued.

“The delivery of a Special Address by FATF Presidents at the Opening Ceremony of CFATF Plenary Meetings has been a longstanding and ongoing tradition, which is indicative of the high esteem and importance that the CFATF places on its partnership with the FATF”, noted Madame Chair Maynard Gibson, and “We value the considerable and direct input that Mr. Richard Berkhout, Policy Advisor, FATF Secretariat and representatives of the CFATF Group of Co-operating and Supporting Nations (COSUNs), namely Canada, France, Mexico, Spain, Netherlands, United Kingdom and the United States of America, have all had, in partnering with the CFATF throughout the reform process.”

“The achievements of the CFATF over the past three years would not have been possible without the steadfast support of former Chairmen The Honourable Samuel Bulgin QC, Attorney General, Cayman Islands, Mr. Manuel Gonzalez, Advisor, International Relations, Oficina Nacional Anti Drogas, Venezuela and Immediate Past Chairman Mr. Cherno S Jallow QC, Director, Policy Development and Research, Financial Services Commission, Virgin Islands, who all embraced and implemented the call for change as part of their individual Work Programmes.” Maynard Gibson recognized. During her interview with CFATF News, Honourable Attorney General Maynard Gibson also made the following observations.

Indeed FATF President Mr. Vladimir Nechaev in extending these encouraging words of congratulations also thanked and especially praised all former Chairs for their leadership for the results of the reform process.

Sentiments that were presaged along the way by former FATF President Mr. Giancarlo Del Bufalo who, in November 2011, “ congratulated the CFATF on the work it had undertaken to improve its performance which were seen as good steps in the right direction and the foundation for a better and stronger organization”.

Similarly in November 2012, FATF President Mr. Bjorn Aamo “congratulated the CFATF for results which will not only be of benefit to the global AML/CFT network but which will also benefit CFATF Members the most. He noted that the CFATF had come a long way and should be able and proud to market our achievements in this area to other parts of the world”

In keeping with President Aamo’s theme, FATF President Mr. Vladimir Nechaev in delivering his Special Remarks at the Opening Ceremony of the CFATF Thirty Eight Plenary Meeting in November 2013, noted that “The FATF should be able to take into account the work that the CFATF is undertaking to increase the level of compliance of its members through the CFATF International Cooperation Review Group (ICRG). The CFATF ICRG is a good example for other FATF Style Regional Bodies to follow.”

FATF President Mr. Vladimir Nechaev’s assessment that “the CFATF should now be perceived as one of the best in its class” should be viewed within the context of the unprecedented access and insight that he, as well as President Mr. Giancarlo Del Bufalo and President Mr. Bjorn Aamo, has and would have had, as Presidents of the FATF as standard setter and protector of the FATF brand.

The Honourable Allyson Maynard Gibson emphasized that, “It is also important to note that the CFATF Council of Ministers kept a firm and watchful eye on the implementation of the reform agenda and mandated that the CFATF should not rest on its laurels but that the search for organizational efficiencies should be an ongoing enterprise”, “It is therefore with this Ministerial mandate in mind and with a view to building on the achievements of the past and importantly contributing to the growth and development of the global AML/CFT network, comprising the FATF and FATF Style Regional Bodies, that a significant if not the central aspect of my Eleven Point Action Plan will boldly embrace cutting edge information technology that will revolutionize the entire AML/CFT Mutual Evaluation process.”

“The CFATF Vision 2022 platform will allow countries to begin the preparatory stages for the on-site visits way in advance of the arrival of the Teams of Assessors, give early access for review and guidance of these efforts, to AML/CFT experts from the CFATF as well as  those from the FATF Secretariat, FATF Members, Secretariats and Members of other FATF Style Regional Bodies, EGMONT, International Monetary Fund, World Bank and relevant agencies of the United Nations such as the Counter Terrorism Executive Directorate.”

“The Vision 2022 platform will expedite the consultative mechanism between the Countries being assessed, the Assessment Teams, the global AML/CFT community and the CFATF Secretariat, all working simultaneously in one document to draft, finalize and present high quality Mutual Evaluation Reports for discussion in Plenary.”
“The potential savings in terms of human and financial resources will be enormous because this process will be applicable to all aspects of the CFATF’s operations and has the potential to significantly increase organizational efficiency and reduce operational costs.

“We will encourage our colleagues in the global AML/CFT network to support our efforts as we roll out this information technology tool in the coming months.”

“My Eleven Point Plan of Action will also include the hosting by The Bahamas of the first of a Caribbean Basin Region wide Conference to be held annually, for public sector officials and private sector executives and representatives to share and exchange developments in financial services, including the creation of a pool of Regional Experts and share resources.”

“This first annual Conference to be held in the first quarter of 2014, will feature a Special Caucus by Heads of Governments and States in the Caribbean Basin Region with a view to securing expressions of support at the highest political levels, for the work of the CFATF, and the provision of the required human and financial resources both to the CFATF Secretariat as well as to national efforts to strengthen human capacity and build and implement robust AML/CFT regimes”

“In implementing my Eleven Point Action Plan, I will have the valuable support of Deputy Chair the Honourable Senor Luis Antonio Martinez Gonzalez, Attorney General, El Salvador who, with the support of all our Spanish speaking Members in Central and South America, will act as the bridge between the CFATF and the Members of our sister FATF Style Regional Body, GAFISUD with whom we have had and will continue to have, strong and fruitful cooperation in terms of translating documents, participating in Mutual  Evaluation Missions, undertaking Joint Typology Exercises and engaging jointly in outreach to relevant national and international organisations operating in our hemisphere.”

“In this regard Deputy Chair Martinez Gonzalez will work with me to explore with GAFISUD the furthering of an idea advocated by Executive Director Wilson at the April 2013 Doha, Qatar meeting between EGMONT and the Secretariats of the FATF and FATF Style Regional Bodies, for the establishment of a Heads of Financial Intelligence Units (FIUs) Forum for the Americas, which will be modelled on the successful CFATF Heads of FIUs Forum and which is being currently considered as a model for the establishment of a similar Heads of FIUs Forum with the FATF.”