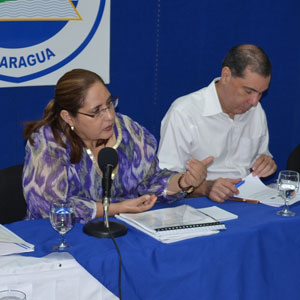 The Honourable Ana Isabel Morales Mazun, Minister of Citizen Power for the Interior and President of the National Council against Organized Crime and Prime Contact of Nicaragua to the Caribbean Financial Action Task Force (CFATF) will host the thirty seventh Plenary Meeting during May 26-30 2013.

Delegates from the twenty nine Member Countries of the Caribbean Basin Region FATF will convene at the Holiday Inn, Pista Juan Pablo II, in the capital city Managua, along with representatives from Canada, France, Mexico, Netherlands, Spain, United Kingdom and the United States of America who comprise the CFATF Group of Cooperating and Supporting Nations (COSUNs) and CFATF Observers such as the Central American Bank for Economic Integration (CABEI), European Union, Financial Action Task Force, World Bank, Organization of American States, United Nations Office of Drugs.

CFATF Chairman Cherno S Jallow Q.C, Virgin Islands applauded the decision by the Government and people of Nicaragua to host CFATF Plenary Meeting XXXVII and confirmed that he was looking forward to working with Honorable Minister Morales Mazun and all CFATF stakeholders over the five days of the Plenary, during which a wide range of issues will be discussed and decisions made which will assist in strengthening the capacity of the Caribbean Basin Region to fight trans-national organized crime, money laundering and the financing of terrorism.

The highlight of the week will be the Opening Ceremony on Wednesday 29th May 2013, when the Keynote Address will be delivered by His Excellency Commander Daniel Ortega, President the Republic of Nicaragua.

His Excellency, The President, has been fully supportive of the sterling efforts and achievements of The Honourable Minister Morales Mazun in bringing a sense of urgency to the national programme to reform and modernize Nicaragua’s Anti Money Laundering and Combating the Financing of Terrorism (AML/CFT) architecture in keeping with international standards.

One of the important aspects of the meeting would be the presentation of the newest staff member at the Secretariat Mrs. Diana Firth Novelo, citizen of Mexico and formerly of Citibank, Mexico who as at May 1st 2013 was appointed Deputy Executive Director of the Secretariat.

Mrs. Firth Novelo’s appointment brings the staff complement at the CFATF Secretariat to twelve (12), five of whom are bi-lingual in English and Spanish, the official languages of the organization. This appointment will further enhance the environment wherein the other members of staff can improve their bilingual capacity as we address the needs of our six Spanish speaking Members.

Also to be presented will be Mr. Eduardo Gamero, a national of Spain, who joined the Secretariat in September 2012 as Information Technology Officer and is the mastermind behind the new and constantly improving CFATF web presence our window to the outside world, the CFATF Knowledge Platform for fee paying Compliance Conferences geared for the private sector and the internal communication and document distribution system amongst CFATF stakeholders.

Mr. Gamero is also responsible for CFATF’s contribution of proposals to an initiative which seeks to modernize the distribution of documents within the global AML/CFT network comprising the FATF and the eight FATF Style Regional Bodies (FSRBs), some of which are now in use.

Considerable attention is also being paid to the speed with which CFATF Members address the strategic deficiencies that pose a threat to the international financial system as identified pursuant to the FATF ICRG criteria, and the sterling work of the CFATF ICRG which mirrors and works in tandem with the FATF ICRG, and seeks to encourage CFATF Members to avoid the attendant perils and loss of international reputation of the FATF ICRG process.

The CFATF ICRG which was formerly chaired by Chairman Cherno Jallow is now under the equally robust leadership of Mrs. Sherene Murray Bailey, Trinidad and Tobago and Mr. Glenford Malone, Virgin Islands, and is coordinated by Mrs. Alejandra Quevedo, Legal Advisor CFATF Secretariat.

Twenty three Follow up Reports will be considered as well as the results of the CFATF Technical Mission to Nicaragua and CFATF ICRG Missions to Belize, Dominica and Guyana. Also to be considered would be the current efforts by Antigua and Barbuda in restructuring the Financial Services Regulatory Commission.

A critical aspect of the CFATF ICRG is the Donors Forum which seeks to provide the platform for marrying the resources available from CFATF donor partners with the Technical Assistance and Training (TA&T) needs of all CFATF members for addressing AML/CFT deficiencies.

The Nicaragua Donors Forum which is being coordinated by Mr. Roger Hernandez, Financial Advisor, CFATF Secretariat, will review the CFATF TA&T Master Plan of Members Needs which is an important aspect of Chairman Jallow’s Work Programme for 2012-2013 and CFATF Donor partners will outline current initiatives and the mechanism by which they can be accessed and delivered in CFATF Member jurisdictions.

The CFATF Working Group on FATF Issues (CFATF WGFI) in keeping with its remit to follow and keep the membership abreast of ongoing FATF initiatives and importantly, in preparation for the Fourth Round off Assessments of CFATF Members which should commence in the second half of 2014, will present with the assistance of Mr. Richard Chalmers, United Kingdom, Co-Chair of the FATF Working Group on Evaluation and Implementation (WGEI) and Mr. Richard Berkhout, Policy Advisor, FATF Secretariat, an overview of the revised FATF February 2013 AML/CFT Methodology, the assessment tool for undertaking the Fourth Round.

Members are encouraged to ensure that their delegations to the Plenary do include relevant officials who will participate in preparing the country for the Fourth Round Mutual Evaluation Mission and/or would have attended the May 2012 Plenary Meeting in El Salvador when the CFATF WGFI conducted a training workshop on the February 2012 FATF Recommendations.

The CFATF WGFI is chaired by Mrs. Cheryl Lister, Bermuda and is coordinated by Deputy Executive Director Ms. Dawne Spicer who will now be assisted by newly appointed Mrs. Diana Firth Novelo.

The CFATF Heads of Financial Intelligence Units (FIUs) Forum will hold its eighteenth meeting since its formation in 2003 and in keeping with the increasingly stronger bonds of friendship and close working relations between the CFATF and with EGMONT, both Mr. Boudewijn Verhelst, President of EGMONT and the EGMONT Regional Representative for the Americas, Mr. Sinclair White, Bermuda will attend.

CFATF Working Group on Typologies will enlist the support of EGMONT in advancing the regional agenda to investigate and publish the latest methods and trends being used by criminal organizations operating in the Caribbean Basin Region.

The Accreditation Working Group which is a sub group of the Heads of FIUs Forum will continue its work on formulating the training modules and the identification of trainers for the implementation of the three year One Million (1,000.000.) Euros Programme for the Accreditation of Financial Investigators and Analysts which should commence in early 2014 and is funded by the European Union and supported by CARIFORUM and CARICOM IMPACS.

This project will be implemented through the CFATF Secretariat and will strengthen regional capacity to take the profit out of crime.
The CFATF Heads of FIUs Forum, Working Group on Typologies and the Accreditation Working Group are coordinated by Mr. Jefferson Clarke, Law Enforcement Advisor CFATF Secretariat.

The Steering Group continues in its oversight role of all aspects of the organization’s affairs and in a departure from previous Plenary meetings will meet all day on Sunday 26th May 2013 to discuss a wide range of issues including the submission of annual contributions by Members, arrangements by the COSUNs with regard to their ongoing support for the work of the CFATF, the Audited Financial Statements for 2012, the general operations of the CFATF including overall membership participation and commitment to achieving the highest levels of compliance with the FATF Recommendations and finally the ongoing search for organizational efficiencies as part of the CFATF reform process.

In 2009 and in keeping with CFATF tradition, the annual May Plenary Meeting was held in Port of Spain. Trinidad and Tobago, the seat of the Secretariat.

The annual May Plenary Meeting was held in the Dominican Republic, Honduras, El Salvador in 2010, 2011 and 2012 respectively and in May 2013 we all arrive in Managua, Nicaragua to continue to celebrate the rich multi-lingual, multi-cultural diversity of the CFATF which continues to be of immense benefit to the organization as a whole and importantly to provide corporate support to Nicaragua in its drive to strengthen their national AML/CFT infrastructure.

It is anticipated that a wide cross section of domestic stakeholders involved in the national AML/CFT agenda will attend the Working Group and Plenary meetings and will be well equipped to prepare Nicaragua for the Fourth Round Assessment.

Carmen Solano- Bernard In House Translator at the CFATF Secretariat has been working closely with Mayor General Denis Membreño Rivas, Director Financial Intelligence Unit Nicaragua who continues to provide such generous, timely and extraordinary support to the Secretariat in completing the arrangements for the upcoming Plenary Meeting.

We are confident that with the ongoing support of The Honourable Ana Isabel Morales Mazun and her team of officials, that Plenary Meeting XXXVII will be a resounding success.