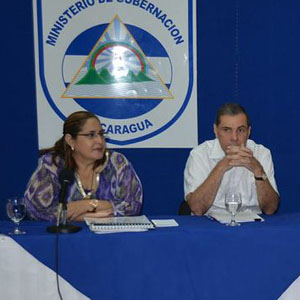 With  broad smiles, hand shaking  and hugs representatives of Nicaragua and Venezuela celebrated with other CFATF Members, Virgin Islands, The Bahamas and Trinidad and Tobago, the recognition of the hard work and bold steps that both jurisdictions continue to take in strengthening the Anti Money Laundering and Combating the Financing of Terrorism (AML/CFT) infrastructure in their respective jurisdictions.

For Nicaragua the personal involvement of The Honourable Ana Isabel Morales Mazun, Minister of Citizen Power for the Interior and President of the National Council Against Organized Crime in the national reform process, reaped rich dividends as the jurisdiction was removed from the threat of being publicly identified as having weak AML/CFT systems which pose a threat to the international financial system.

Minister Morales with the full support and authority of His Excellency Jose Daniel Ortega Saavedra, President of the Republic of Nicaragua, provided the leadership and drive to domestic stakeholders, which resulted in the expeditious enactment of key AML/CFT legislation and regulations which were in keeping with the FATF Recommendations.

Minister Morales noted that "the  Government of Nicaragua is pleased that its international partners in the global AML/CFT network namely the FATF and FATF Style Regional Bodies, recognize the considerable progress that Nicaragua has made in a very short timeframe."

Whilst thanking CFATF Executive Director Calvin Wilson for his support before and during the meeting, Minister Morales noted that "the achievement of Nicaragua at the FATF Plenary is not  simply a clinical matter of analyzing legislation against the FATF Recommendations and determining whether there was compliance, it also has a personal dimension that is not readily acknowledged."

"We must not forget the significant assistance provided behind the scenes by the staff at the CFATF Secretariat, in particular, Mrs. Alejandra Quevedo, Legal Advisor, Translators Mrs. Michele Morales and Ms Carmen Moreno and Information Technology Officer, Mr. Eduardo Gamero all of whom played and will continue to play a part in preparing the case that has been and will be advocated to the global community on behalf of Nicaragua", said Minister Morales.

Whilst acknowledging the recent enactment of regulations governing the micro finance sector and the entities that are supervised by the Financial Intelligence Unit, the FATF has included Nicaragua on its Public Statement, Improving Global AML/CFT Compliance: on-going process, and encourages Nicaragua to address its remaining deficiencies and to continue the process of implementing its action plan.

In extending warm congratulations to Nicaragua and in particular to Minister Morales for her strong leadership and commitment, both CFATF Chairman Cherno Jallow Q.C., and Deputy CFATF Chair Mrs. Allison Maynard-Gibson, Attorney General of The Bahamas who both attended the FATF Plenary, encouraged Nicaragua to expeditiously address the outstanding AML/CFT issues so that scrutiny by the FATF could eventually come to a close.

Minister Morales welcomed the kind words of encouragement and support and confirmed that Nicaragua is "fully committed to effectively implementing a robust national AML/CFT which was in compliance with accepted international standards and to be a solid partner in the global fight against transnational organized crime and the financing of terrorism."