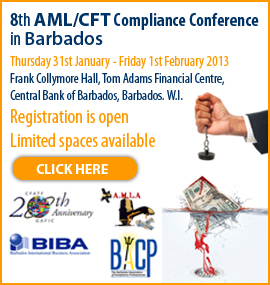 Since December 2000, the CFATF, in keeping with its mandate as approved by Caribbean Basin Regional Ministers, to coordinate and deliver Technical Assistance and Training in each of its twenty nine Member countries, continues to have considerable success in arranging (AML/CFT) Compliance Conferences for both the public and private sectors.

The upcoming Conference will be the CFATF’s eighth AML/CFT Compliance Conference although it will be the second Public Education and Awareness Raising event to be hosted by the CFATF in Barbados. The Conference is supported by key public sector institutions that are pivotal to the establishment and continued development of an effective national AML/CFT regime that sustains the highest levels of compliance with the FATF Recommendations and is undertaken in close collaboration with and enjoys the fullest involvement of the private sector.

The government departments supporting the Conference include the Office of the Attorney General and Prime Contact of Barbados to the CFATF and the Financial Intelligence Unit (FIU). These authorities along with the Central Bank of Barbados provide considerable support to the continued growth, development and successes of the AML/CFT agenda across the Caribbean Basin Region through the dedication, expertise and experiences of their public servants within the CFATF Steering Group, Plenary and Working Groups Meetings, as well as in the Heads of FIUs Forum and the Mutual Evaluation Programme.

Barbados as an important founding Member of the CFATF, has a strong and highly respected voice within the CFATF family, and has held the organisation’s highest honour, when during October 1998- November 1999, former Chief Justice the Honourable David Simmons performed duties as CFATF Chairman, successfully guiding the organization through its formative years.

The 2012-2013 period is of considerable significance for the CFATF because as we celebrate our twentieth anniversary, the FATF has promulgated the Revised FATF Recommendations and is engaged in updating the AML/CFT Methodology, which is to be utilized to assess AML/CFT regimes during the Fourth Round of the Mutual Evaluation Programme which is due to commence around mid - 2014.

In this context the upcoming January/February Compliance Conference will be the first in a series of similar conferences around the Caribbean Basin Region that the CFATF will be organizing as part of its AML/CFT Public Education and Awareness Raising Road Show.

All countries in the Region need to prepare for this new world order and both the public and private sectors need to work hand in hand to ensure that the national reputation is protected and the consequences of low or non-compliance are avoided.

The CFATF has placed the highest priority on public education, awareness raising and capacity strengthening initiatives which are designed to bolster the ability of the Caribbean Basin Region to take the profit out of crime.

In this regard available information confirm that Barbados has successfully prosecuted four Money Laundering cases and critically has secured the forfeiture of drugs related assets. These successes need to be given the highest public profile domestically, regionally and internationally as they go hand in hand with the message of “Taking the profit out of Crime” from the continued training of Financial Investigators and Analysts around the region to follow the money and to building strong defensive mechanisms against the criminals.

Underpinning positive results like these in any CFATF jurisdiction must be support at the highest political level to demonstrate that the country is attuned to the evolving international agenda to fight financial crime and the necessity that the legislative infrastructure must accommodate in a timely fashion changes in the international standards to combat money laundering and the financing of terrorism.

The political directorate must also be cognisant of the impact on a country’s reputation with the international investment community of low levels of compliance or being seen as non-cooperative with regional and global partners in vigorously and effectively pursuing financial crime.

The ability of any country to attract and maintain foreign direct investment would be seriously affected, as will its ability to sustain economic development and meet the day to day needs of its citizens without the attendant negative impact on employment rates and potential social dislocation.

The Revised FATF Recommendations require a central and important role for governments in preparing national AML/CFT risk assessments as well as establishing an effective national coordinating mechanism so that a strong AML/CFT architecture can be established.

So the Barbados model, where there is a central role on AML/CFT issues for senior members of Cabinet like the Attorney General, who set the agenda and climate in which the AMLA, FIU and the CBB are intimately involved in the AML/CFT education process working hand in hand with the CFATF, as the regional monitoring mechanism and fully supported in their endeavours by the Office of the Prime Minister, is emulated by other CFATF jurisdictions.

It is through this prism as well as the seriousness with which Barbados views the need for bolstering regional and international cooperation on AML/CFT issues, that the choice of Barbados, by the CFATF, as the venue CFATF to kick start this Regional Public Education and Awareness Road Show must be viewed.

The investment from the Donor Community over previous years through initiatives like the Caribbean Anti Money Laundering Programme (CALP) and the on-going efforts of Eastern Caribbean Financial Investigative Advisory Team (ECFIAT) are bearing fruit as Barbados together with other CFATF jurisdictions are recording increasing successes in prosecuting money laundering cases and forfeiting illegal proceeds. It is expected that these accomplishments will encourage even more such cases and forfeiture of assets in the future, with burgeoning national Confiscated Assets Funds across the region, which could be reinvested in the national AML/CFT agenda.
The Region also needs to be galvanized into action on new issues such as the Foreign Account Tax Compliance Act (FATCA), the requirements, obligations, timelines, the dangers of non-preparedness or non-engagement and whether there should be a national or regional approach to dialogue with the United States Inland Revenue Service or both and who should take the lead.

This eighth AML/CFT Compliance Conference as well as the overall Public Education and Awareness Raising Road Show has the blessings of the CFATF Council of Ministers and is being undertaken with the support of the considerable AML/CFT expertise and experiences of the staff at the CFATF Secretariat, demonstrating the benefits that the twenty nine CFATF Member countries derive from the effective functioning of the CFATF Secretariat.
CFATF Secretariat - January 8th 2013