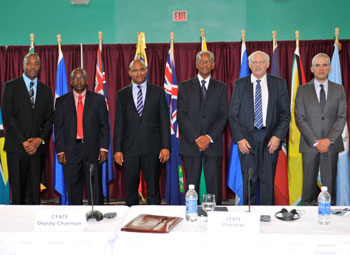 Trinidad and Tobago was warmly congratulated for its removal from the FATF ICRG monitoring process and encouraged to continue working with the CFATF Follow up Process to complete the reform of its AML/CFT infrastructure by November 2013.

The decision by the FATF to conduct an onsite visit to Venezuela as part of the ongoing FATF ICRG process was applauded and Venezuela encouraged to ensuring that the upcoming visit in January 2013 is a success.

Jamaica and Trinidad & Tobago signed a Memorandum of Understanding to facilitate cooperation in the fight against money laundering and the combating of terrorism at the 17th meeting of the CFATF Heads of Financial Intelligence Units Forum.

The CFATF endorsed the findings of the Quality and Consistency Review of the Mutual Evaluation Reports endorsed by the Council of Ministers during the Third Round of Mutual Evaluations and agreed that it should be shared with the Financial Action Task Force (FATF) for consideration in the ongoing dialogue on the Fourth Round of Assessments. Funding for this important project was provided by the Commonwealth Secretariat with whom the report will be shared.

The CFATF ICRG continued to aggressively pursue its mandate to encourage all CFATF Members to expeditiously address the deficiencies identified in their Mutual Evaluation Reports. The significant progress made by St. Kitts and Nevis, St. Lucia, Suriname and the Turks and Caicos Islands was acknowledged.  The outcome of the High Level Mission to Jamaica was welcomed and similar Missions to Belize, Dominica and Guyana were approved.  Plenary endorsed the recommendation by the CFATF ICRG that all Members are expected to rectify all outstanding AML/CFT deficiencies by November 2013.

The CFATF Accreditation Working Group (AWG) met on November 12th 2012, continuing its mandate to determine the framework for the proposed accreditation program for analysts and financial investigators in the region. This project which will strengthen regional capacity to take the profit out of crime is being undertaken in partnership between the CFATF and the European Union, CARIFORUM, CARICOM IMPACS and United Kingdom Eastern Caribbean Financial Investigations Advisory Team.

EGMONT launches it Strategic Analysis Course for the Western Hemisphere for CFATF English and Spanish speaking Members which will be held in Miami during June 2013 in partnership with the CFATF, FINCEN, OAS/CICAD, Mexico United Kingdom and the United States Department of State. The course is key to the effective management and operations of an Financial Intelligence Unit.

The United States’ FINCEN in conjunction with OAS/CICAD has developed Principles of Appropriate use of FIU information which was approved on September 30 2012 and which will soon be available to all CFATF Members through the OAS/CICAD website.

On January 1, 2013 Mr. Lennaert Peek will succeed Mr. Dick Van den Hamm as the new Director of the FIU in Aruba.