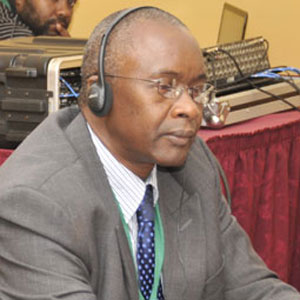 On Thursday 15th November 2012, Mr. Cherno Jallow, QC, Director, Policy, Research and Statistics, Financial Services Commission, Virgin Islands, assumed the CFATF Chairmanship for the 2012-2013 period on behalf of his country at the 36th Plenary Meeting of the Caribbean Financial Action Task Force which held its 36th Plenary Meeting at the Multipurpose Complex in Tortola in Nature’s Little Secret, the warm and beautiful Virgin Islands during November 12-15 2012.

Chairman Jallow noted that “The CFATF is now a mature organization, rightly proud of its achievements” and that the Virgin Islands has an unwavering commitment to the continued success of its operations.”

In his dialogue with the media which is important to disseminating pertinent and accurate information on the CFATF’s achievements and its Work Programme for the future, Chairman Jallow indicated that it was critical that the public should be made aware that the CFATF had role in “ making the public aware that we are all part and parcel of the process. We all play a key role in driving the process forward in taking our mandate seriously as a global partner in preventing money laundering and terrorist financing activities.”

The CFATF is confident that during the currency of Chairman Jallow’s Chairmanship and indeed beyond, that the organization will build on the achievements of the past and in the interest of comity, cooperation and the strengthening of the genuine and cordial working relationship that exists with its traditional partners, will concentrate on developing mechanisms that will truly aid the continued positive growth of the organization.