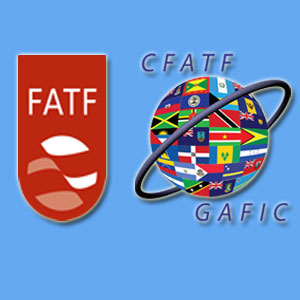 It was an absolute joy to watch. Mr. Vladimir Nechaev, President of the Financial Action Task Force (FATF) and Mr. Richard Berkhout, Policy Advisor, FATF Secretariat, at home, in beautiful Nassau, The Bahamas, and with particular and enjoyable ease, responding to the hard and persistent questions from Ministers, Attorneys General, senior technical officials and private sector representatives involved in the International Financial Services sector from CFATF Member countries.

All of this under the watchful eye of the Honourable Allyson Maynard Gibson, Attorney General and Chair of the Caribbean Financial Action Task Force (CFATF), host of the First CFATF Anti Money Laundering and Combating the Financing of Terrorism (AML/CFT) Conference which was held in Nassau, The Bahamas during April 2-3 2014.

President Nechaev enjoyed the interaction with the delegates and readily answered the lively questions from delegates. It was clear that this was a man who understood the minutiae of the FATF Recommendations and was willing to share his knowledge and experiences with the region.

The CFATF, just like the FATF and the other FATF Style Regional Bodies, is fully engaged in preparing its Members and the Mutual Evaluation Team at the Secretariat for the onset of the Fourth Round of Assessments which commences in January 2015.

The FATF 2012 Recommendations and the updated assessment Methodology bring with them a much more onerous and resource intensive assessment process in both human and financial terms when compared with the Third Round of Mutual Evaluations.

In light of this and cognizant of the ongoing financial challenges being experienced by the small and developing economies in the region, Madam Chair Maynard Gibson, on assuming leadership of the CFATF, became convinced that a regional conversation on the adoption of a serious approach to, the provision of adequate resources for and buy in at the highest political levels were critical ingredients for success in pursuit of higher levels of compliance with the FATF Recommendations.

For this goal President Nechaev was a worthy and willing ally and so after discussions in late November 2013 on the margins of the CFATF Plenary Meeting, the idea of the First CFATF Regional AML/CFT Conference was conceived, and became a reality with the urgency it deserved, four months thereafter.

For Madam Chair Maynard Gibson this was a very rewarding exercise which continued the tone of her bold and innovative leadership of the CFATF. New initiatives were announced. The Right Honourable Perry Christie, Prime Minister, The Commonwealth of The Bahamas offered to champion the work and achievements of the CFATF with CARICOM Heads of Governments and Regional Institutions as well as on the international stage as its Patron.

The Right Honourable Prime Minister supported her call for at least seventy five (75) percent % compliance at the end of the Fourth Round by all CFATF Members and called for the establishment of the CFATF Council of Elders, “a forum where current and former CFATF Chairmen could meet as circumstances dictate, to review issues facing the organization and its membership, to provide guidance and to undertake strategic intervention to assist in accomplishing CFATF objectives”.

This initiative has reinforced the confidence of FATF President Nechaev in the ability of the CFATF to successfully manage the challenges that lie ahead for its members in addressing the stronger and more demanding assessment structures that are part and parcel of the Fourth Round of Assessments.

The First CFATF Regional AML/CFT Conference led to the issuing of the Nassau Re-Affirmation which recommitted the CFATF to the effective partnership with the international community in the fight against money laundering, the financing of terrorism and proliferation financing.

And in more good news, the First CFATF Regional AML/CFT Conference solidified the close working relationship between the FATF, the standard setter and the CFATF, the first FATF Style Regional Body.