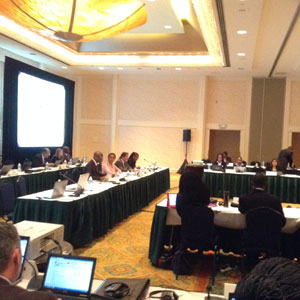 Just one week after our CFATF Plenary, the Egmont Group of Financial Intelligence Units (FIUs), held its own Plenary Meeting where the Financial Intelligence Unit of Jamaica and St. Maarten were admitted as Members of that distinguished Organization. With this addition, the total of CFATF Members that are also Members of Egmont is twenty-two (22).

Also during the 2014 Egmont Plenary, Mr. Sinclair White, Director of the Financial Intelligence Agency in Bermuda, was reappointed as one of the Americas Egmont Regional Representative. The Americas Region has thirty six (36) Members, including CFATF, GAFISUD and our Cooperating and Supporting Nations (COSUN) Members in the Region. His support in strengthening the AML/CFT collaboration network, training and Regional interaction has been truly valuable. Congratulations!

The Egmont Group is an informal network of FIUs for the stimulation of international co-operation. Egmont Group FIUs meet regularly to find ways to promote the development of FIUs and to cooperate, especially in the areas of information exchange, training and the sharing of expertise. Being part of the Egmont Group represents an important achievement and ongoing commitment for a Financial Intelligence Unit in terms of structure, performance and information sharing standards, and also an important element of compliance with FATF Standards (Rec. 29) which require FIUs to apply for Egmont Membership.

At the CFATF May 2014 Plenary Meeting which was held in Miami, Florida May 25th-29th, 2014, the Commonwealth of The Bahamas continued with the leadership role of CFATF. Members and always collaborative and generous Observers and Supporting and Cooperating Nations (COSUNs) engaged in a week of excellent discussions. Key developments during the Working Groups and Plenary Meetings were as follows:

At the CFATF WGFI May 2014 meeting, the final CFATF Mutual Evaluation Procedures were approved with valuable input from all its Members and other bodies, such as the International Monetary Fund (IMF) and the World Bank (WB).

The WGFI meeting also served as a forum to discuss upcoming Mutual Evaluations and for parties to share their experience in the process so far.

During the first day of the meetings and throughout sessions, CFATF Members got the opportunity to understand the different technical assistance programs offered by Canada, United States and organizations such as the IMF, WB and the Organization of American States (OAS). The Process and recommendations to prepare successful funding requests were highlighted.

Also during the first day of meetings, the CFATF ICRG discussed progress made by the different jurisdictions under review. It was highlighted that after an exit process which included a combination of a desk review and conference calls, St. Lucia and St. Kitts and Nevis, no longer required CFATF ICRG monitoring. Congratulations!

The situation of Aruba and Dominica as countries that could potentially exit the ICRG process was also discussed. Aruba as a FATF and CFATF member, was subject to the FATF follow-up process with regular reporting to the CFATF. According to the 8th Follow-Up FATF Report for Aruba, the jurisdiction has achieved satisfactory levels of compliance with Recommendations 3, 5, 13, 23, 26, 35, 36, 40, and Special Recommendations I, II, III, IV and V. Overall Aruba has addressed deficiencies relating to all Core and Key Recommendations, and brought the level of technical compliance with these Recommendations to a level essentially equivalent to an LC. The FATF Plenary agreed to remove Aruba from the regular follow-up process. The CFATF therefore agreed to Aruba exiting both the CFATF ICRG and CFATF follow-up process. Congratulations!

Dominica’s progress was acknowledged as well as the efforts and support received from other partners, such as the CFATF, that conducted a High Level Mission to the jurisdiction. The process for Dominica to exit the ICRG will commence right after Plenary. Congratulations!

JURISDICTIONS THAT WERE NOT MAKING SUFFICIENT PROGRESS

Among the most important matters, the situation of Guyana was discussed. According to the Action Plan and CFATF ICRG Assessor Report (as well as the CFATF follow up report) Guyana had not completed the legislative amendments required in the examiners recommended actions in the Core and Key Recommendations 1, 3, 4, 5, 13, 23, 36, 40, SR. I, SR.II, SR. III, SR. IV and SR. V and the remaining Recommendations 6, 7, 8, 9, 11, 14, 15, 17, 21,22, 25, 29, 33, 37, SR. VI, SR. VII and SR. IX. Members were called to apply countermeasures, considering money laundering and terrorist financing risks emanating from Guyana in November 2013. Members were consulted and recommended that the May 2014 Plenary agreed to the issuance of a further public statement and approve the referral of Guyana to the FATF. The CFATF looks forward to continue working with Guyana to address its deficiencies.
See related CFATF Public Statement, published on May 29th, 2014.

JURISDICTIONS THAT ARE MAKING SUFFICIENT PROGRESS

Belize has undertaken several legislative amendments since the November 2013 Plenary. Eleven (11) pieces of primary legislation were passed by the National Assembly, three regulations were made and all of these are in full effect. Two (2) additional amending Acts were scheduled to be considered by National Assembly prior to the May 2014 Plenary. One (1) of these is an Act to amend the Trusts Act to make mandatory the inclusion of beneficiary information in the International Trusts Registry. The other is an Act to amend the Gaming Control Act. These amendments will require production of identification information on natural persons behind corporate shareholders of gaming licensees; application of fit and proper criteria for all beneficial owners of controlling or significant interests, managers or operators; and provide enhanced supervisory powers, including power to impose administrative penalties, for the gaming regulator. Administrative Penalty Regulations will come into force concurrently with the amending Act. In addition, Belize has undertaken numerous non-legislative initiatives to enhance compliance in the public and private sectors. Furthermore, the review conducted by the Secretariat in the follow-up report indicates that Belize has taken measures to substantially comply with twelve (12) out of fourteen (14) Core and Key Recommendations rated as PC or NC, which represents remarkable progress. It was therefore recommended to Plenary, that Belize’s improved status was acknowledged. See related CFATF Public Statement, published on May 29th, 2014. Congratulations!

Since February 1996, the CFATF has been conducting a number of Typology Exercises which allow for the sharing of information collated by various bodies involved in the fight against money laundering, with the aim of increasing awareness of the attendant risks to the Caribbean Basin Region.
A Typology Exercise covering the area of Human Trafficking was finalized and published on May 29th, 2014.

END OF THIRD ROUND FOLLOW-UP PROCESS