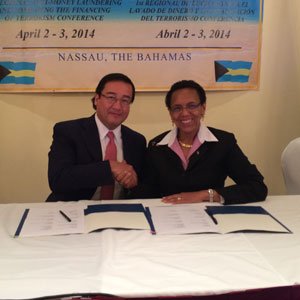 In another forward thinking move which is becoming the hallmark of The Bahamas’ leadership of the Caribbean Financial Action Task Force (CFATF), Madam Chair Allyson Maynard Gibson, Attorney General the Commonwealth of The Bahamas hosted the First Annual Regional Anti Money Laundering and Combating the Financing of Terrorism (AML/CFT) Conference on April 2-3, 2014 at the British Colonial Hilton Hotel Nassau, The Bahamas.

The result was the Nassau Re-Affirmation on Anti Money Laundering, Combating the Financing of Terrorism and Proliferation Financing.

This Conference provided national authorities in all CFATF Members with pertinent information on how to successfully undertake the Fourth Round of Mutual Evaluations which will begin in January 2015 and to achieve the goal of at least seventy five (75) percent compliance with the FATF Recommendations. The event was attended by high ranking Ministerial officials, Attorneys General and designated Representatives who embraced this challenge positively.

The issues included among others, the need for all CFATF Members to develop a serious approach to educating all regional stakeholders including the private sector, on the importance of the Fourth Round of Mutual Evaluations, the critical role of the National Risk Assessments as well as the Technical Assistance and Training Programmes for Secretariat staff, Mutual Evaluation Examiners and national stakeholders that are vital to achieving a high level of compliance with the revised FATF Recommendations.

Opening Remarks were delivered by the Right Honourable Perry G. Christie, Prime Minister, Commonwealth of The Bahamas, whose presence underscored the importance of this regional dialogue on the Fourth Round of Mutual Evaluations and the critical necessity of the Governments of each and every CFATF Member signaling to our international partners, the commitment at the highest political levels, to provide adequate human and financial resources for the Mutual Evaluation Programme.

In another significant development, Prime Minister Christie announced his readiness to undertake the very important commitment of being a patron to the CFATF, championing its work within CARICOM and around the world, strengthening its relationship with other Regional Bodies such as CARICOM and ensuring an adequate flow of resources so that the CFATF could do its work effectively. See Opening Remarks here. Remarks by Rt. Hon. Perry Christie

In keeping with the close working relationship between the CFATF and the Financial Action Task Force (FATF), Madam Chair Maynard Gibson extended a special invitation to Mr. Vladimir Nechaev, President, FATF, her co-parent of this Conference who delivered the Keynote Address.

President Nechaev spoke about the FATF Mandate, its strong partnership with the CFATF, its relationship with the Private Sector, and the importance of complying with FATF Standards. For speech delivered click here. http://www.fatf-gafi.org/pages/aboutus/fatfpresidency/

The Commonwealth Secretariat is a founder CFATF Observer Organisation and has contributed significant financial resources to the growth and development of the CFATF with regard to strengthening AML/CFT capacity in the Caribbean Basin Region.

The CFATF owes the Commonwealth Secretariat a considerable debt of gratitude and a Special Address was delivered by Legal Advisor, Mr. Shadrach Haruna, on behalf of Ms. Katalaina Sapolu, Director, Legal & Constitutional Division, which highlighted the longstanding relationship between both organizations and the mechanisms by which such close collaboration could continue during the Fourth Round of Assessments and beyond.